Ecological funeral — this is a set of ways to bury a person, the task of which is to cause minimal harm to the environment.

More than 56 million people die every year on our planet. This means that the impact of funerals and their consequences for the ecology of the entire Earth is becoming enormous. To show concern for the future generation in the world, the "green funeral" is gaining relevance and popularity – eco funeral. The main task of eco-funeral – to make the process of burial and disposal of the bodies of dead people as harmless as possible to our environment.

Which countries already have eco-funerals?

The leaders of this trend are countries that traditionally pay increased attention to environmental issues. First of all, these are Great Britain, the USA, Canada, Germany and Sweden. In Ukraine, the level of responsibility of citizens for the future of their children and the entire planet Earth is also growing. Ecological funerals are beginning to gain demand in large cities of Ukraine: Kyiv, Kharkov, Dnipro, Lvov, Odessa, etc.

GRAAL Ritual Bureau actively supports the trend of eco funerals.
Preserving nature and preserving it for future generations is important for each of us.< /p>

In early 2019, the Cabinet of Ministers of Ukraine submitted a draft law to the Verkhovna Rada providing for permission for the bioburial of dead people in parks, forest parks, squares and other land plots, as is already practiced in many European countries. It is expected that this will save money on funerals and solve the problem of lack of space in cemeteries. In Kyiv, there really are not enough places in city cemeteries. The population of large cities is growing, and the cemeteries on the outskirts have long been filled. Moreover, the places of burial of people are often surrounded by residential areas; at the same time, the territory with burials pollutes the soil and groundwater.

What is ecological funeral

1. Burial in an eco-cemetery.
Such cemeteries are common primarily in countries such as the UK and the USA, but they partly resemble burial places familiar to many Ukrainians.

2. A coffin or urn made of biodegradable materials.
It may seem to an ordinary person that a classic wooden coffin certainly meets the requirements of an eco-funeral. But no. Eco-activists are pushing for the use of trees that have not been cut down during intensive deforestation and subsequently treated with chemicals. Also, in the manufacture of eco-coffins, metal parts, inner fabric upholstery, etc. should not be used.

The main thing is that over time the coffin completely decomposes and does not cause damage to the environment, as is usually the case when various harmful substances enter the soil and groundwater.

Coffins made of cardboard, woven straw, bamboo or papier-mâché are suitable for eco-funerals.

We are negotiating with the main manufacturers of coffins.
Coffins made of eco-friendly materials should also be presented in Ukraine! 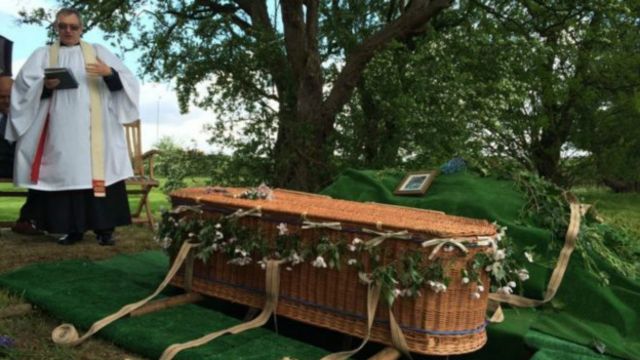 3. Using the remains of the deceased for the benefit of the living.

For thousands of years, mankind has mainly used two forms of "utilization"; bodies of the deceased: cadaverization and cremation. For the manufacture of six wooden coffins, an average 1 cubic meter of boards is required. With cremation, the situation is no better. During cremation, the remains are exposed to temperatures around 850°C, which require an average consumption of 27 liters of liquid fuel or 42 cubic meters of gas over an hour and a half. At the same time, not only carbon dioxide is released into the atmosphere, but also other harmful substances: dioxins, which are released from the tissues of a corpse treated with formalin, as well as a few grams of mercury (from dental fillings).

However, many consider cremation to be more environmentally friendly than burial. Although burning a corpse releases four times more carbon dioxide into the atmosphere than cremation, cemeteries with burials in coffins, by their very existence, cause much more harm to the environment than columbariums with urns.

We all know the stories about how famous scientists tried to continue serving for the benefit of mankind even after their death, bequeathing their skull or even skeleton to the needs of educational institutions that train medical specialists. In our time, a similar opportunity is available to a wider range of people. For example, in the United States, the company Eternal Reefs ("Reefs of Eternity") operates, which creates artificial reefs from the ashes obtained as a result of the cremation of corpses to support the life of marine flora and fauna off the coast of Florida.

IF YOU HAVE AN ADDITION OR IDEAS FOR THE DEVELOPMENT OF ECO FUNERAL IN UKRAINE, YOU CAN CONTACT US BY PHONE: